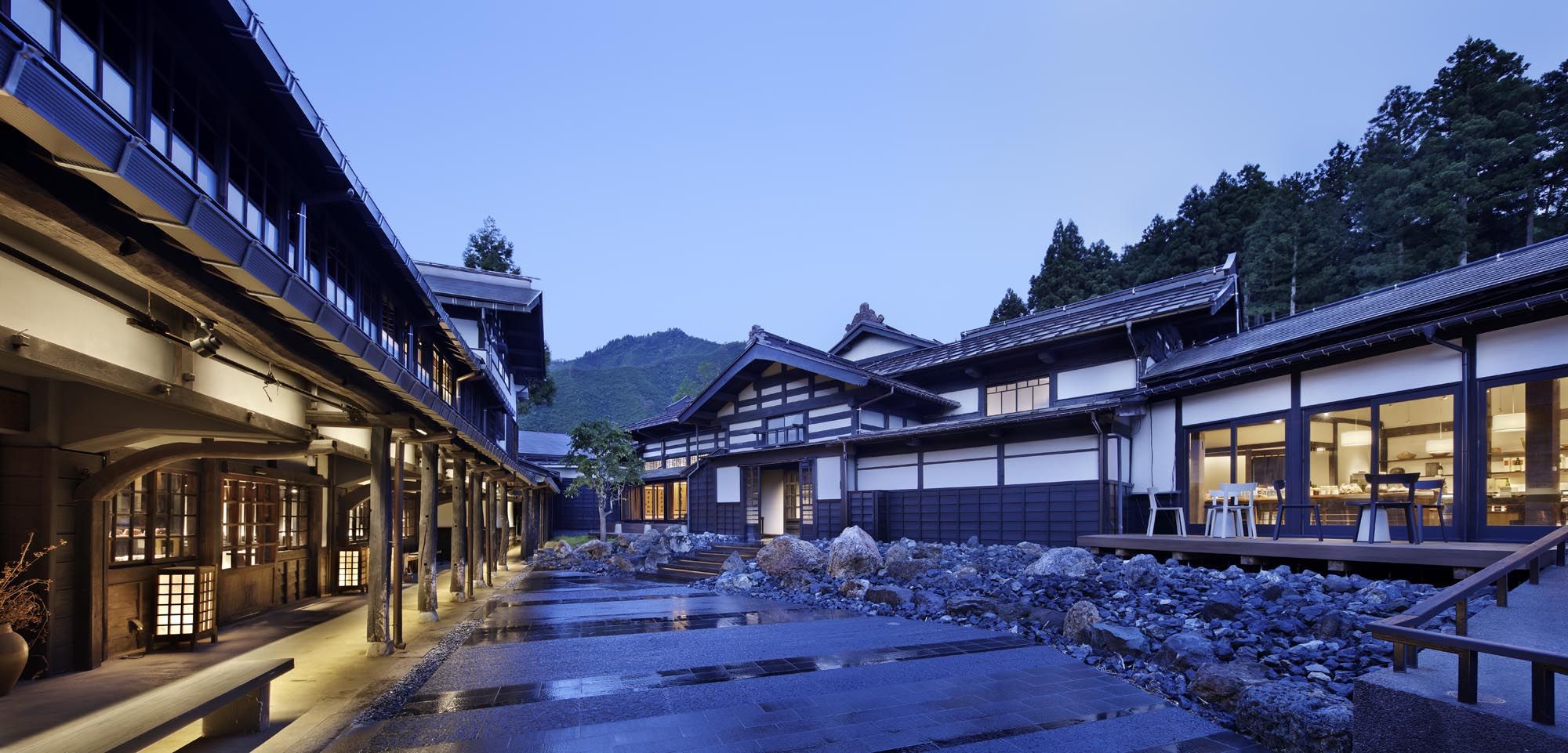 Minami Uonuma in Niigata. In one of the snowiest places in the country stands an impressive building that draws the eye. It is named Ryugon as it was built on the ruins of Ryugon temple which was a branch temple of the ancestral temple Unto-an of Nagao Masagake, brother-in-law to Uesugi Kenshin, former lord of Sakado Castle.
The building sits on grounds around 5000m2 and was built at the foot of Mount Sakado which is a nationally designated cultural property where Sakadao Castle once stood when around 200 years ago during the Bunka Bunsei Period it was built from buildings that were relocated having served as the mansions of village heads and rich farmers. There are several instances of interesting folk architecture that can be found around Tohoku and Niigata on display at ryugon such as the chumonzukuri that protrudes out from the main building, and the kagotoshi that was built to allow being carried by basket from the living room to the study .
It is an historically important building but it has spent many years standing up to the tough winter conditions of a region notorious for heavy snows, and definitely needed some attention to bring it up to modern standards. It was not just the building itself but also the accommodation that could benefit from a refresh, so HATAGO Isen, an onsen ryokan in Echigo Yuzawa with a proven track record in running an inn with a focus on Snow Country Culture, took over the management of the establishment.

In the summer of 2019 the old Ryugon took on a new lease of life as ryugon, an accommodation where you could come to experience the culture of one of Japanese snowiest regions.
It is here that the fresh nature and the people who live there who have been raised in that pure white world, can come in to contact with travellers from all over the world. A place where you can feel the blessings of the snow through the landscaping, architecture, cuisine, art, activities, and events. Inside the facility you can experience the peace of the countryside throughout the four seasons, and the welcoming hospitality enables one to enjoy truly relaxing times. The memories that remain from the original Ryugon, and the smiles that it brought to people are an integral part of the future of Snow Country and ryugon.
Each winter over 2 meters of snow piles up all around. Then in spring the snow melts and the new shoots of plants start to emerge in the mountains. In summer you can see the blue skies reflected in the rice fields, and in fall the golden sheaves of rice stalks are stirred by the breeze. The life and culture of this land continue through this cycle of the four seasons.
It is hoped that all those who come into contact with this area will have an unforgettable experience and create some special memories. ryugon aims to be an accommodation that is thankful for the blessing of the snow and wishes to foster an understanding in travellers for this land and its culture.

Carrying on the family tradition of innkeeping, in 2005 he took over the reins at Echigo Yuzawa HATAGO Isen. His unique management style of using the accommodation as a showroom for the region has garnered lots of attention. In 2008 he was a coordinator for the Snow Country Tourism Zone which united seven neighbouring districts into one area, and in 2011 became the Executive Director of the project. In 2018 it won a main prize at the 4th Japanese Tourism Awards, and has been given much attention as the pioneer of DMOs in Japan. With his experience as a hospitality professional and with regional development he has come up with an idea of a tourism concept of cooperation between the accommodations and the regions known as "Ryokan 3.0", and with this concept at the forefront he took over the management of the Onsen Inn Ryugon, and so in 2019 ryugon was born.
Creative Director

Their base of activities is Tsunan town in Niigata Prefecture. Their speciality is branding for areas and businesses, with the aim of communicating the charms of regional Japan to the world. They have received many awards for their work including: The Good Design Award for the Matsunoyama Townscape Design in 2017, the top prize at the Japan Tourism Awards for the branding for the Snow Country Tourism Zone, and awards at ADFEST and the Tokyo Interactive Awards.
Architect & Interior Renovation

Focusing on architecture they specialise in using design to expand a region through civil enginnering, town development, and energy. They use the idea of geographical architecture which takes into account the geography, climate, and culture of an area to come up with a plan. They have received many awards for their work including the ASIA DESIGN PRIZE in 2020 for their work in ryugon, The Good Design Award for the Matsunoyama Townscape Design in 2018, as well as The Architects' Prize and the outstanding performance award from the Kanagawa Architecture Concour
Planner & Copywriter

She writes on the theme of travel as an extension of living, as well as working as an editor. She works on trips that bring her in to contact with culture, the nature at the destination, and the people working there. She has authored "Birthday Herb" (Mito Medicinal Herb Garden Edition / Asahi Shinbun Publications), as well as planning and editing other publications. She has also contributed as a planner and advisor for accommodations, filming, and written copy. For ryugon she has been involved with planning, copywriting the website, as well as producing the picture book "mori o maneku" (images by Yuuki Ito).
Landscape Design

President of stgk and landscape designer. He worked as an assistant to artist Jae-Eun Choi and hasparticipated in Earthscape since 2009. They have worked on large scale urban revitalization projects as well as regional and suburban revival schemes, designing the landscapes where people live. They have received The Good Design Award among other accolades. He is also a lecturer at Chiba University, Aichi University of the Arts, and Tokyo Denki University.
Landscape Designer (in charge of planting)

He has been working as a landscape designer whose main focus is "planting design" that takes into account the conditions of diverse environments, vegetation, and differences in greening technology, and has been involved in many projects both in Japan and overseas, following the concept of creating environments where humans and plants can coexist while harnessing the benefits that we receive from nature. Notable completed projects include Hino Komorebi Ossuary, Kinjofuto Parking, Tokoha University Shizuoka Kusanagi Campus, and Branch Yokohama Nanbu Market among others.
Furniture Design & Furniture Crafting

Youbi was founded in Nishiawakura in Okayama Prefecture. He is known as a pioneer of crafting furniture from domestic soft wood. His works can be found both in Japan and overseas in a variety of locations from private homes to hotels, ryokans, businesses and public institutions, and his designs are brought about by the unique landscape of certain environments. Currently he is putting his deep knowledge of furniture and product design to use by contributing to learning across the country at universities as well as with the government and private sector. He has won many prizes both in Japan and overseas, including the Fukutake Culture Encouragement Award. He is also a lecturer at Shinshu University.
Lighting Designer

His interest in the relationship between light and architectural spaces led him to transistion from architectural design to lighting design. Since 1990 he has been travelling the world in a quest to find inspiring lighting. His search for beautiful natural light has taken him from the aurora of Alaska to the moonlit nights of the Sahara desert, and has inspired him to design lighting that captures the excitement that stirs the human spirit on encountering light. He is highly decorated and has received prizes such as the Award of Excellence (International Association of Lighting Designers) and Japan Lighting Award (The Illuminating Engineering Institute of Japan). 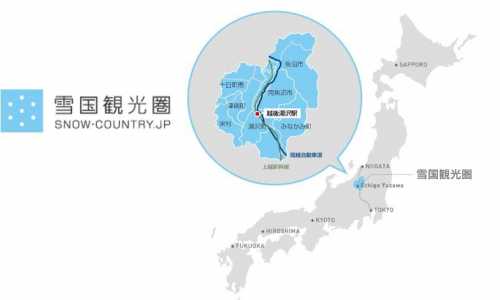 The Snow Country Tourism Zone, which consists of seven municipalities across the three prefectures of Niigata, Nagano and Gunma, has been praised for its unique organizational structure that allows advanced branding which gives Yukiguni (Snow Country) Culture a unique value in the region and fosters public-private partnerships. It has received a great deal of attention as a pioneer of the DMO concept in Japan. In order to advance this project to the next stage I believe it is necessary to have a "place" where it is possible to experience the value of the Yukiguni brand. At that time I was asked whether I would be interested in using my experience as a ryokan owner to take over the running of an old ryokan in Minami Uonuma city called Ryugon. Ryugon was built of old Yukiguni mansions reconstructed on site, is recognised as a cultural asset by the nation, and is a landmark in the area. Myself and the other members of the Snow Country Tourism Zone had been working on the concept of Yukiguni Culture for the last 10 years and I wondered if I couldn't use this to bring new life to the ryokan. At the same time it would fill a long standing need for a location where it was possible to experience Yukiguni. To reinvigorate ryugon which covers 16,000㎡ and 16 old buildings of various sizes is the challenge of a lifetime. However it isn't just about my wishes. I believe that "an accommodation should be the showroom for the region". In a small area like Yukiguni Uonuma, the management policy of an inn can have a big effect on the future of the region. The additional challenge for ryugon is to be able to help the local producers find new markets, to help the locals rediscover the value in the region, and together with the staff to create a new future. It is our duty to make sure that we leave the important things that our predecessors left us in a good state for the future generations. Our challenge has only just begun - to make sure that there is still a Yukiguni 100 years from now. 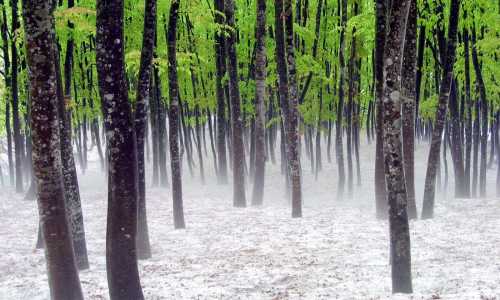 This area has developed a specific Snow Country Culture typified by coexistence with the snow that has continued since the Jomon Period around 8000 years ago. Ryugon, which has created a cultural asset in the form of a landowner's mansion by reusing old buildings that have fallen into disrepair over the years, will from now on become ryugon and carry this tradition of Snow Country into a sustainable future.

Life in a region of heavy snow has to start with gratitude for the blessings that the snow brings. With the aim of being "an inn that fosters the sensitivity of the traveler and the culture of the region", we would like to communicate the value of the Snow Country Culture to the world.

We will continue the the traditions of Snow Country Culture that have been passed down around the region for food, activities, and architecture.

We will try to reduce our environmental impact, for example by installing a cooling system that runs off well water.

We will undertake initiatives to restore the natural environment of Mount Sakado which is a nationally designated cultural property.

In order to cater to the various needs of our customers we will endeavor to pursue versatility and functionality, not just limited to the scope of the ryokan.

We can advise you on your ideal stay at ryugon tailored to your unique requirements..